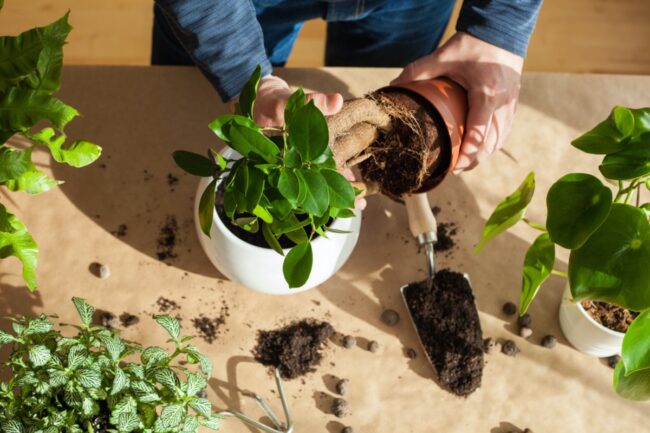 Although we talk of green thumbs as if some fortunate people were born with them, gardening skills are acquired through experience. To determine the degree of your green thumb, ask yourself the age-old nursery rhyme question, “How does your [indoor] garden grow?”

If growing indoor plants seems as contrary to you as the rhyme’s Mary, you may not be choosing the best houseplants for your skills or the conditions in your home. Start with more easygoing houseplants and you’ll soon have the confidence to grow more demanding ones. However, if your plants are already doing so well that you’re tiring of them, it might be time to up your indoor gardening game with something more challenging.

Since plants grown for their greenery are generally easier to please than those with showy flowers, foliage types may be the best indoor plants for beginners. After honing your green thumb on leafy plants, it may become easier to care for bloomers without making too many bloopers. 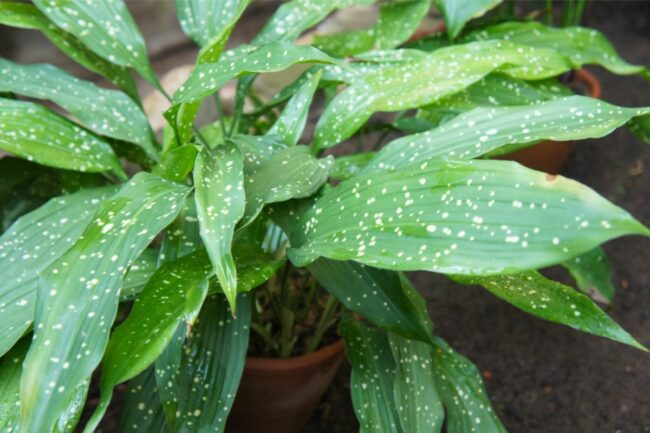 Also called the barroom plant or barbershop plant because of its ability to survive dim conditions and neglect, this plant’s long lance-shaped green or white-striped leaves can thrive in low-light situations, such as near a north-facing window. It also tolerates almost drying out between waterings, except (possibly) in spring and early summer when it makes most of its growth and should get more water. Some of the only things that will kill a cast-iron plant are excessive watering or too much sun. 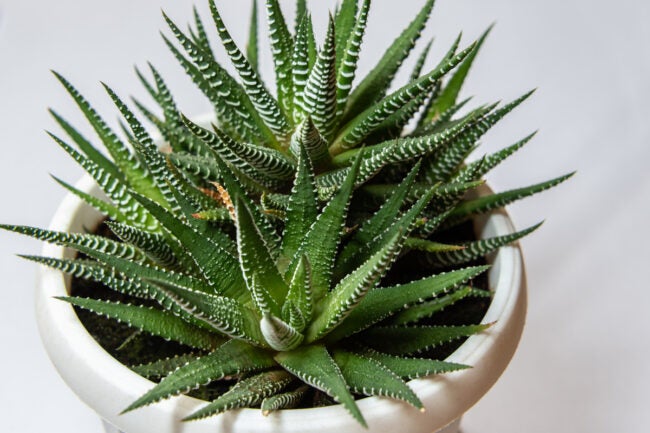 This small succulent, with its rosette of spiky (and often spotted) upward-growing foliage, takes up very little space and very little of your time. Resembling hen and chicks plants in its ability to make offsets around itself, haworthia does fine with just bright, indirect light and occasional watering.

Related: Count On These 25 Indoor Plants for Easy Color Year-Round 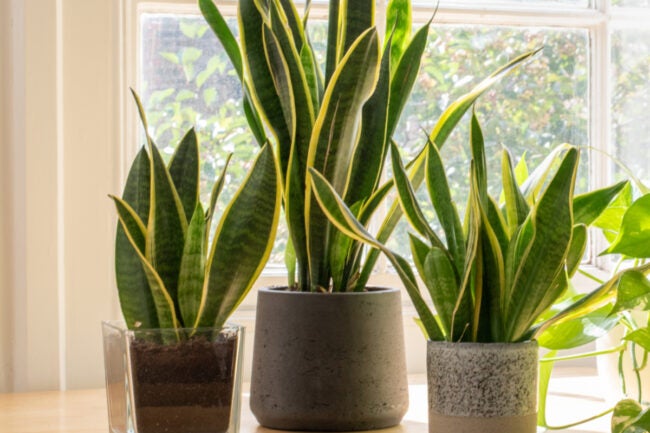 Also called mother-in-law’s tongue because of its leaves’ sharp margins, this species’ sword-shaped foliage will actually be very lenient about any of your houseplant-keeping deficiencies. A snake plant can maintain an upbeat—or at least upward-pointing—attitude with only bright indirect sun and sporadic watering. 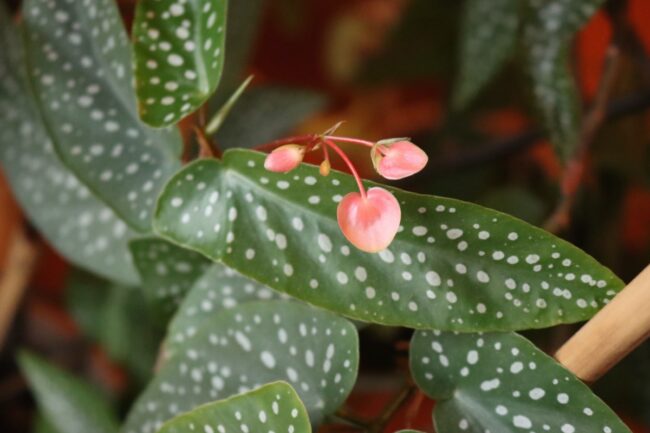 An angel because it tolerates indoor conditions better than other begonias, the angel-wing begonia is in truth named for its wing-shaped leaves, which are often dotted or dabbled with lighter colors. It grows well in bright indirect light or partial sun from an east- or west-facing window, and the flowering plant can be allowed to dry out a bit between waterings. It usually dangles clusters of blooms in late winter or spring. While easygoing, this plant does require occasional pruning to prevent it from becoming leggy. 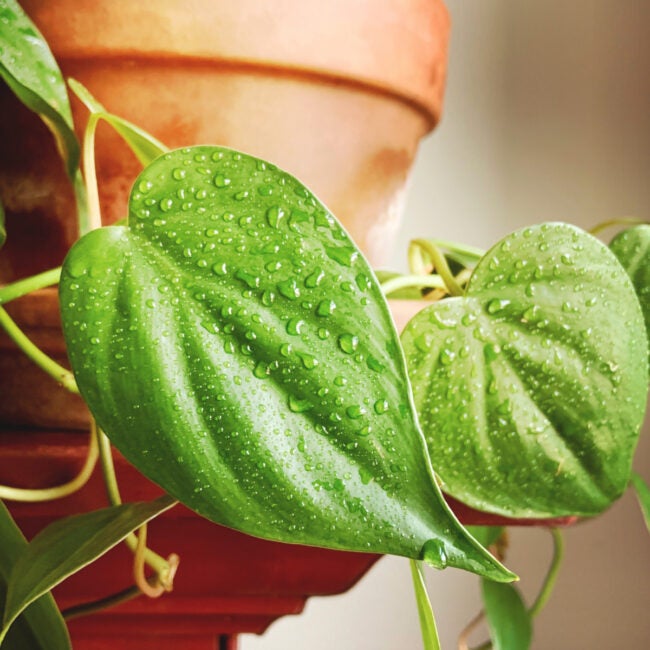 This dish garden denizen does well in a pot by itself, where it can be allowed to scramble to its hearts’ content. You either can leave it to dangle or attach it to a pole, against which it usually makes larger leaves. It can dry out a bit, too, but ideally not all the way down. This philodendron tolerates low humidity reasonably well, but place it on a windowsill over a sink to keep it even happier.

These trickier indoor plants will require a bit more catering to their preferences. However, they will reward you with plenty of color to compensate you for the increased time and effort you spend tending them. 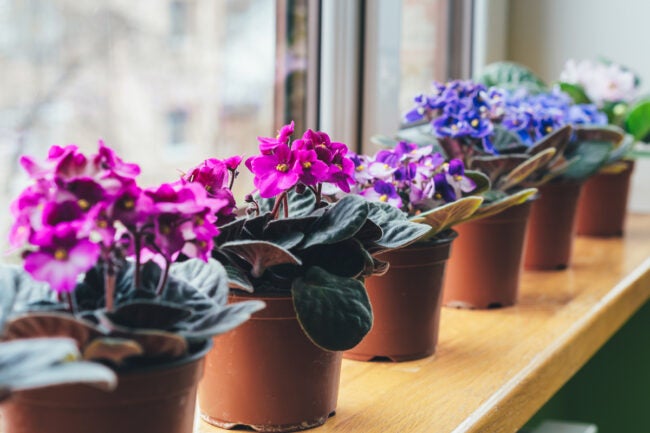 If your supposedly easy-to-grow African violet always ends up with unsightly spots on its leaves, the culprit is likely your watering practices. This “warm and fuzzy” plant, often associated with grandmothers, doesn’t like cold or hard water. It looks its best when irrigated with lukewarm, calcium-free water—from the bottom to avoid splashes on its foliage—and with enough moisture to keep its soil perpetually damp but not soggy. It can flower nearly year-round when placed in bright indirect light or under a grow light. 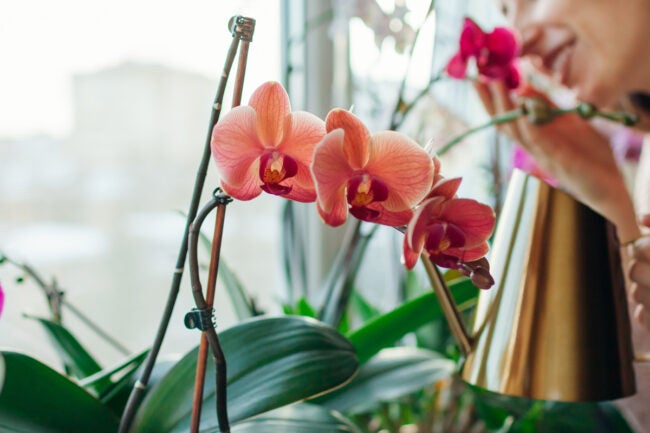 The moth orchid is the type most frequently sold in department stores. Since it can get by with bright, indirect light and watering only when its chipped bark medium has dried out about an inch down, it’s one of the easiest orchids to care for. However, it can be difficult to bring the plant into flower again after purchasing it. To encourage reblooming, place it in a shaded area like a porch over the summer and into early autumn. Nighttime temperatures that dip down into the 55 to 60 degree Fahrenheit range for at least two weeks to a month should spur it into setting buds again.

Related: The Best Plants for Every Room of the House 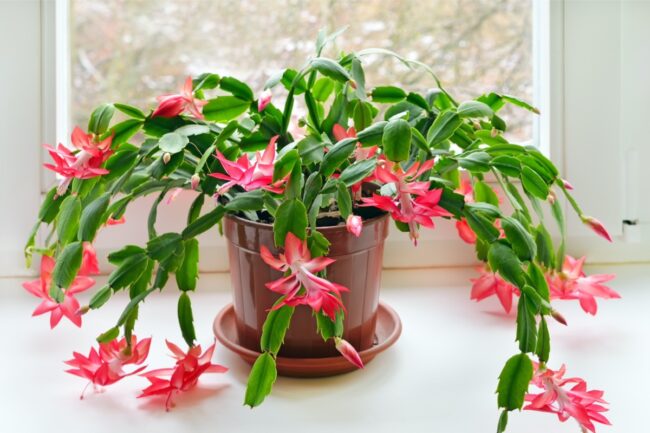 Keep this rainforest cactus in fast-draining, lightly damp soil from spring to autumn, only allowing the soil to dry out more in winter. To increase its chances of flowering, move your Christmas cactus outdoors to a shady location during summer and leave it out as late as possible in autumn. Then, place it on an east-facing windowsill in a cool room (between 60 and 70 degrees Fahrenheit) that stays dark for 14 hours every night—such as a little-used guest bedroom. If you must move it again, do so before it begins to bloom or it’s liable to lose all those hard-won buds. 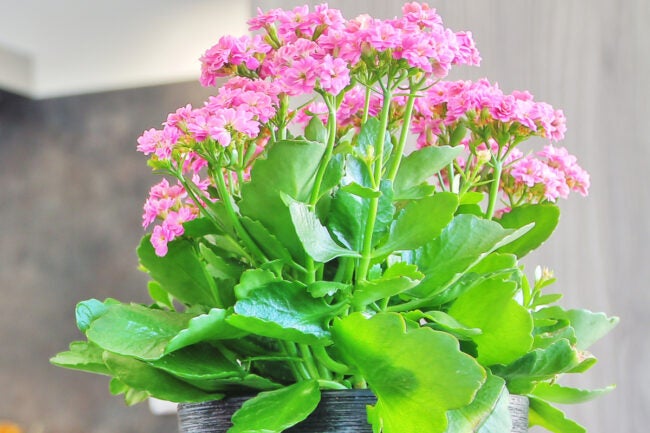 One of the easiest houseplants to grow if you’re satisfied with its scalloped succulent foliage, florist kalanchoe will thrive in either sun or bright indirect light, and it can be allowed to dry out between waterings. To convince it to flower again, however, you will need to follow the same summer-through-autumn routine outlined for Christmas cactus above, since this is also a short-day plant. 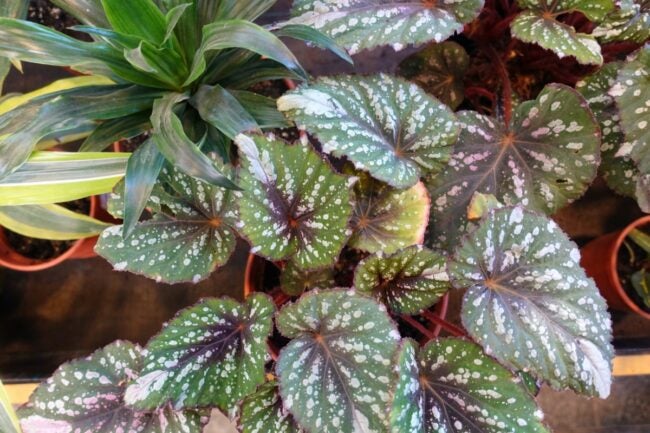 Also known as fancy leaf begonia, this one produces such intricate patterns on its foliage that it is grown for its leaves rather than its flowers. In fact, growers often pinch the buds off for this reason. Give the plant bright indirect light, and water it just after the surface of its soil dries. Additionally, provide your rex begonia with a humidity tray or humidity tent, or place it in a humid room (such as a bathroom). Plenty of water vapor is required to prevent the edges of its foliage from browning. Avoid misting the plant, however, as that can spot those elaborate leaves.

If you think there’s no houseplant you can’t grow, try a few of the following tougher indoor plants, some of which tend to frustrate even the experts. If nothing else, they may help to keep you humble! 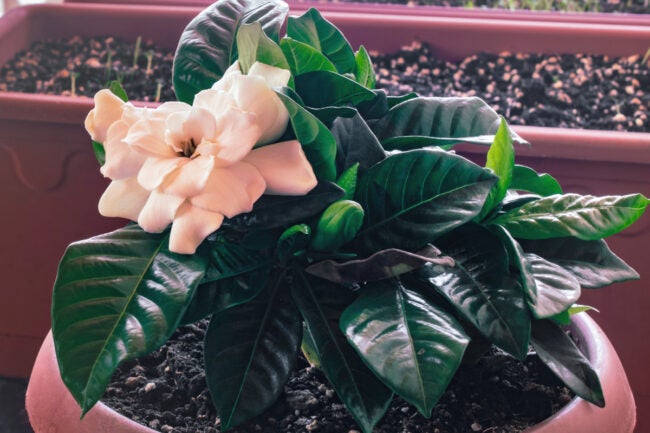 The temperamental gardenia tests even highly experienced gardeners. In The Unexpected Houseplant, indoor gardening maven Tovah Martin warns that the only time the plant is likely to bloom is when living outdoors during summer. During other seasons, place your gardenia in very bright indirect light, which you can manage by placing a sheer curtain between it and a south-facing window. Make sure the room’s temperature drops into the 60–69 degrees Fahrenheit range at night. Keep its acidic soil lightly moist, preferably watering with rainwater to prevent a buildup of calcium. Provide your gardenia with all the humidity you can, and hope for the best! 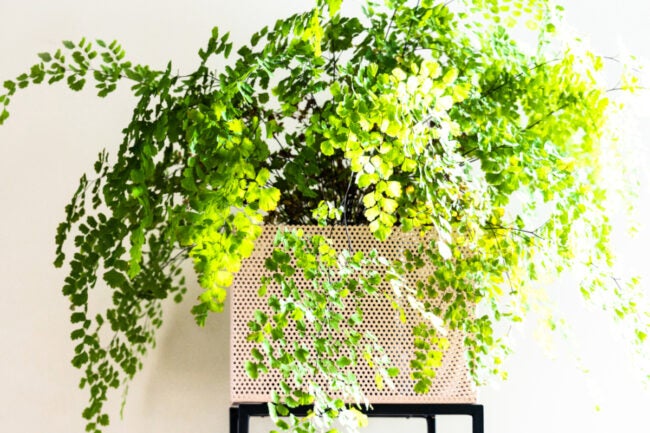 One of the loveliest and laciest of ferns, the maidenhair can also be exceedingly difficult to keep alive indoors due to its high humidity needs. Indeed, it seems to be the houseplant that shrivels most quickly on department store shelves. When quite small, it can be kept inside a terrarium. Otherwise, try placing this fern on a windowsill in a frequently used bathroom, where steam from showers and diffused light from privacy glass will make it feel at home. Keep its soil lightly moistened, and never spray the plant’s fragile “tresses” with chemicals. 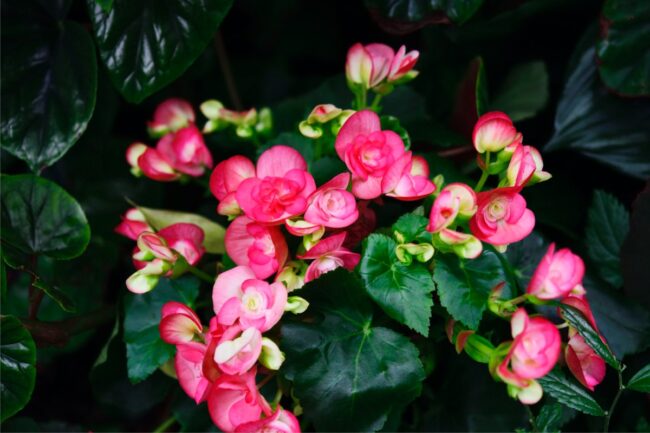 This plant and its showy double blooms appear in stores during winter, a time when flowers are most appreciated. But, if you want more blooms the following winter, you’ll need to begin preparing as soon as the original ones shrivel. Cut the plant’s stems back to three inches and keep its soil barely moist for six weeks. Once you begin watering normally again, new stems should sprout. When those reach the same height as the old stems, snip the new stems off and root them in a separate container. In summer and autumn, give the new plant the short-day treatment previously described for Christmas cactus and florist kalanchoe.

Related: 14 Symptoms of an Unhappy Houseplant (and How You Can Treat Them) 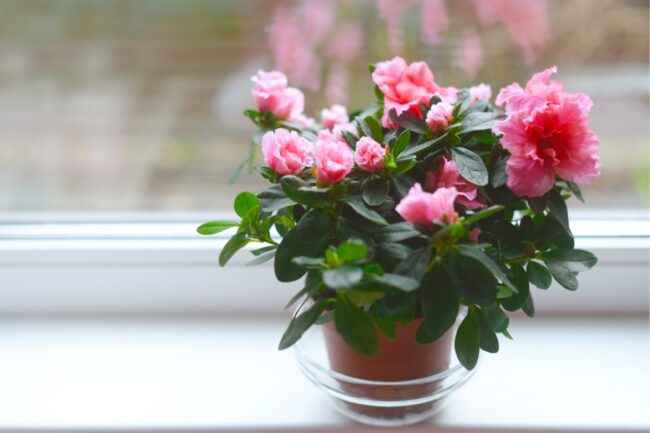 The already flowering azalea you pick up on Easter or Mother’s Day is usually a tender, evergreen type that won’t survive frost outdoors. If you wish to keep yours as a houseplant, provide plenty of bright indirect light and never allow its soil to dry out completely. Move it to a shaded outdoor area during summer, and leave it there until it has withstood six weeks of nighttime fall temperatures between 40 and 55 degrees Fahrenheit. At that point, bring it indoors and, if possible, keep it at temperatures between 50 and 60 degrees until it buds. 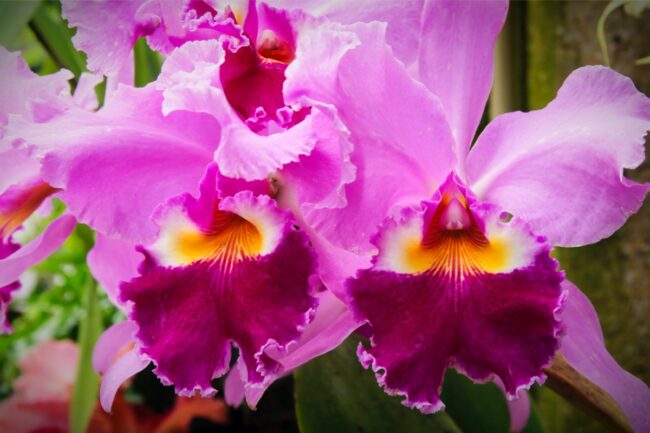 The epitome of showy but picky, the cattleya (also known as the corsage orchid) requires bright light but can overheat in midday or afternoon sun. Because of this, try an east-facing windowsill where it receives morning sun instead. It should be kept slightly on the cooler side, with daytime temperatures in the 70 to 79 degrees Fahrenheit range and in the 60s at nighttime. Grow the plant atop a humidity tray and mist it frequently, preferably where a slowly turning overhead fan moves the air. Allow its chipped bark medium to dry out before you water it thoroughly again—usually about once a week, but that can vary.