The downward trend for markets so far this year has had a disproportionate impact on cannabis stocks. The S&P 500 index is down more than 12% this year, but cannabis ETFs AdvisorShares Pure Cannabis and EFTMG Alternative Harvest are down more than 36% and 26%, respectively. That’s disconcerting for investors, but mixed in with all that bad news is an opportunity to buy in on solid cannabis companies whose shares are depressed but have strong financials.

NewLake Capital Partners (NLCP -1.12%) and GrowGeneration (GRWG -3.90%) are ancillary cannabis companies. They don’t hold licenses for cultivating, producing, manufacturing, selling, transporting, or distributing cannabis products, but they benefit from the money made by cannabis producers.

Take the long-term view: The global cannabis market is expected to have a compound annual growth rate (CAGR) of 32.04% through 2028, growing to be a $197.74 billion business by that time, according to a study by Fortune Business Insights. It makes sense to invest in companies that are strong financially and well positioned to benefit from that growth. 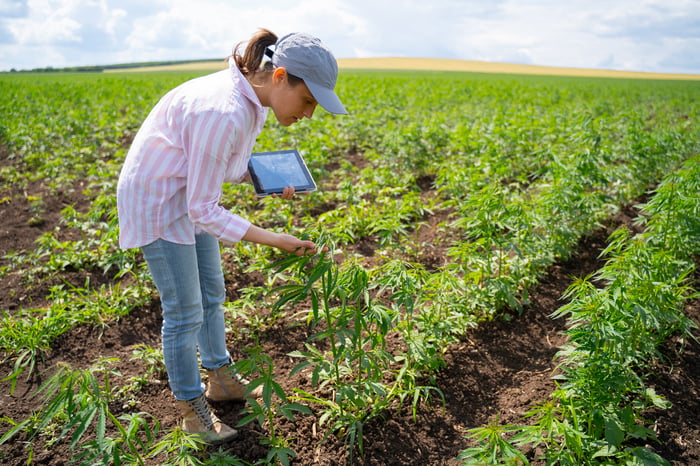 NewLake Capital Partners is a real estate investment trust (REIT), like the better-known Innovative Industrial Properties, that specializes in leasebacks to cannabis companies. NewLake, which went public last August, buys cannabis companies’ cultivation facilities and dispensaries, freeing up cash for those companies, and then leases those properties back with triple-net leases that put most costs on to the tenants.

The company’s shares are down more than 21% so far this year, but it’s easy to see it has a solid business plan. Since it was founded in 2019, it has purchased 29 properties representing 1.5 million square feet. Its tenants include well-known cannabis companies Trulieve, Cresco Labs, Curaleaf, and Columbia Care, and as of March, all of its properties were rented and the company has had no tenant defaults on deferrals. Its leases are long term, spanning an average of 14.5 years. It has $127 million in cash and only $2 million in debt.

Perhaps the most enticing thing about NewLake is its hefty dividend. The company has raised its dividend for four consecutive quarters and at $0.33 a share, it offers a yield of 5.87%.

There are some concerns to factor in, though. It is still a small company, so it doesn’t have as much built-in diversification as Innovative Industrial Properties. NewLake also needs to continue to grow to keep up with its dividend offerings. Last year, the company had an adjusted FFO of $1.20, but its current rate of dividends pays out $1.32 per share on an annualized basis. That’s an AFFO payout ratio of 110%, which, even for a REIT, would be unsustainable in the long haul — unless it continues to increase FFO. Fortunately, it has little debt, so it can afford to buy and lease more properties.

GrowGeneration, founded in Colorado in 2014, is the largest chain of specialty hydroponic and organic garden centers in the United States, with 63 retail and distribution centers across 13 states. Hydroponics, the method used to grow plants indoors without soil but in a nutrient solution root medium, can be used for nearly any plant, but it is especially useful to grow cannabis, both commercially and for individuals. According to a report by Mordor Intelligence, the expected CAGR for the hydroponics industry is 7.8% from 2022 to 2027.

It stands to reason that the company should benefit as more states decriminalize marijuana use and allow marijuana sales, both medicinal and adult-use. Why, then, is the stock down more than 54% so far this year?

The main reason is timing. The company had a rough fourth quarter at the same time the markets soured a bit on cannabis stocks in general. The effect was a double whammy that has turned an overpriced stock into a growth stock that is priced to sell.

The culprit in the loss was a drop in same-store sales by 12.3%, year over year. Another down note was the company’s revised guidance of net revenue between $415 million to $445 million and adjusted EBITDA of between $30 million and $35 million, which, even at the top numbers, represents only a slight increase from 2021.

In its fourth-quarter earnings call, GrowGeneration CEO Darren Lampert blamed the slowdown on a glut of outdoor cannabis in western states that led many growers to scale back production and expansion plans, cutting back demand for LED lighting and projects that would use GrowGeneration products.

However, the company said it doesn’t see the glut lasting as more eastern and northern states begin growing cannabis indoors. 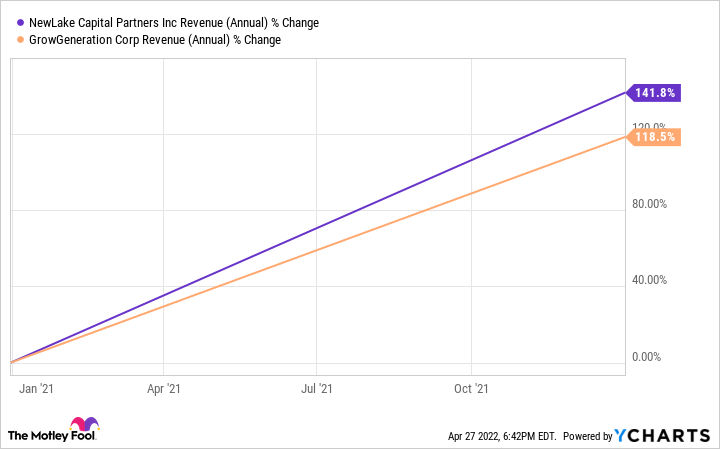 Taking advantage of an opportunity

No one is saying that cannabis business won’t increase for ancillary businesses. However, as this year has shown, there will be industry growing pains, particularly with companies such as GrowGeneration and New Lake Capital Partners, both of which can be considered small-cap stocks. Still, both companies have managed to be consistently profitable and have shown solid long-term gains, which shows they have the management expertise to survive short-term bumps.

The drop in their share prices now make the stocks, both with reasonable price-to-earnings ratios, more attractive, considering their expected growth.